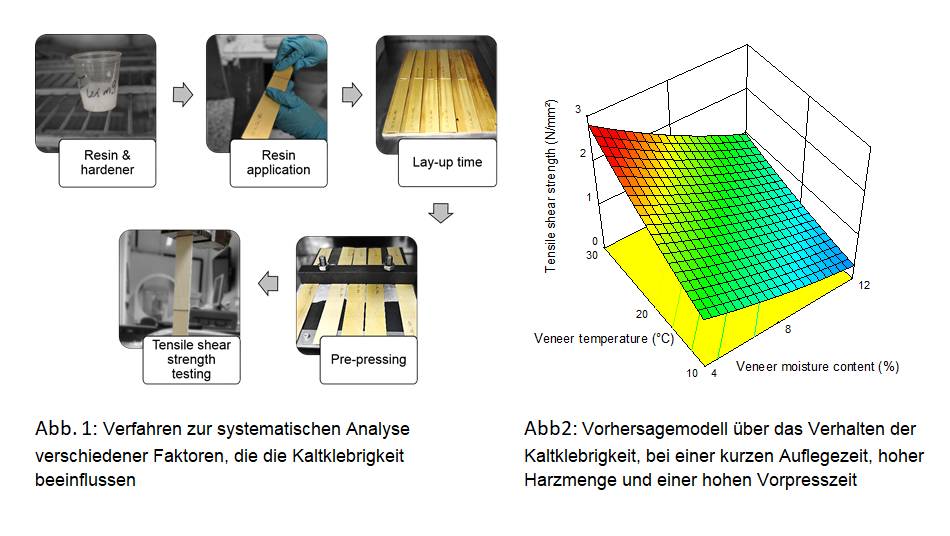 Cold tack of the adhesive is absolutely necessary in plywood production. Insufficient cold tack is usually seen as a typical adhesive problem and leads to complaints. An analytical method has been developed that proves, that many other factors also play a role. For example, cold tack decreases when the wood moisture content increases or increases with temperature. Based on the analytical data, a statistical model was build that predicts how cold tack reacts on the combination of many influencing factors. This model is used to educated plywood producers, leading to a reduction of failure in plywood production.

It is common practice to pre-press plywood panels in a cold press to activate the cold tack of the adhesive before transferring the veneer stack into an adjacent multi-daylight hot press. This procedure and the cold tack of the adhesive are necessary for the veneers to stick together after the glue application. Sufficient cold tack is absolutely essential for the step of feeding the hot-press, particularly in plywood panel production, where the glued veneer layers have to stick together to fit into the openings of the press. If the tack fails, the pile opens, does not fit in the press and cannot be processed. Generally, it is assumed that this failure is being caused by poor adhesives. This leads to complaints, annoyed plywood producers, and a tarnished image of the adhesive producer. Cold tack of the adhesive may depend on various adhesive related factors such as synthesis procedure, adhesive age, and the addition of additives. Cold tack can, however, also be influenced by other “non-adhesive” factors, for example the open assembly time, climate, as well as adherent related factors such as wood species, moisture content, and surface age. These factors are known mostly by experience, accessible systematic investigating of cold tack behaviour for plywood production is scarce. As this information is of great importance, a method was developed to quantify cold tack with subsequent systematic investigation of potential influencing factors.

Tackling the issue: an analytical method enriched by statistical analysis

Industrial adhesives of different age were applied on typical veneers with determined set moisture contents and temperature. A second veneer was placed on the overlapping surface with no external pressure and the veneers were stored in climate chambers of defined humidity and temperature for the period of the lay-up time. Following the lay-up period, the samples were pre-pressed using a manual press exposing the samples to the same controlled climatic conditions as during the preceding step. The samples were tested subsequently in tensile shear mode using a universal testing machine (Fig. 1). A large number of factors and their combinations were investigated and statistically analysed. This analysis enabled the calculation of the effect of numerous combinations of different factors – including those that were not experimentally investigated.

Cold tack of UF resin could be successfully tested with the proposed testing procedure, which allowed observing various influencing factors from sample preparation until strength determination.

The model is used to adapt and optimize individual factors to achieve the best cold tack at respective situations and avoid additional handling during the production process (Fig. 2). The resin producer can educate plywood producers how to prevent poor cold tack in the first place and how to react when cold tack still decreases.

This work enables plywood producers to significantly decrease product failure. The resin producer does not longer receive complaints, but is instead credited as an adhesive expert and valuable partner.